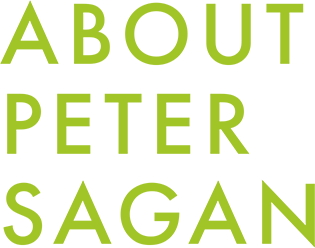 There is no doubt that Peter Sagan will go down in history as one of the legends of professional cycling, leaving his mark with a number of records that will be very hard to beat in the future.

Having won the prestigious ‘Maillot Vert’ points jersey the first time he rode the Tour de France in 2012, he went on to increase his tally, reaching an unprecedented and record-breaking 7 Green Jerseys in 2019.

With 121 professional victories to his name, Peter has proved he can win at every type of race from the one-day ‘Classics’ and ‘Monuments’ to three-week-long stage races and World Championships, including the first European Championship. In adidtion to his impressive winning palmarès, Peter is famous for his incredible bike-handling skills and sheer strength.

While he makes winning look easy today, his life as a professional cyclist is the result of many years of hard work and struggle. Born in Žilina, Slovakia, in his early races he rode just in trainers and a t-shirt, and drank only water looking out of place among other riders racing in lycra and using high tech sports drinks. Having never forgotten his humble beginnings, he always makes time for his supporters many of whom travel from far and wide to watch ‘The Tourminator’ race and to win.